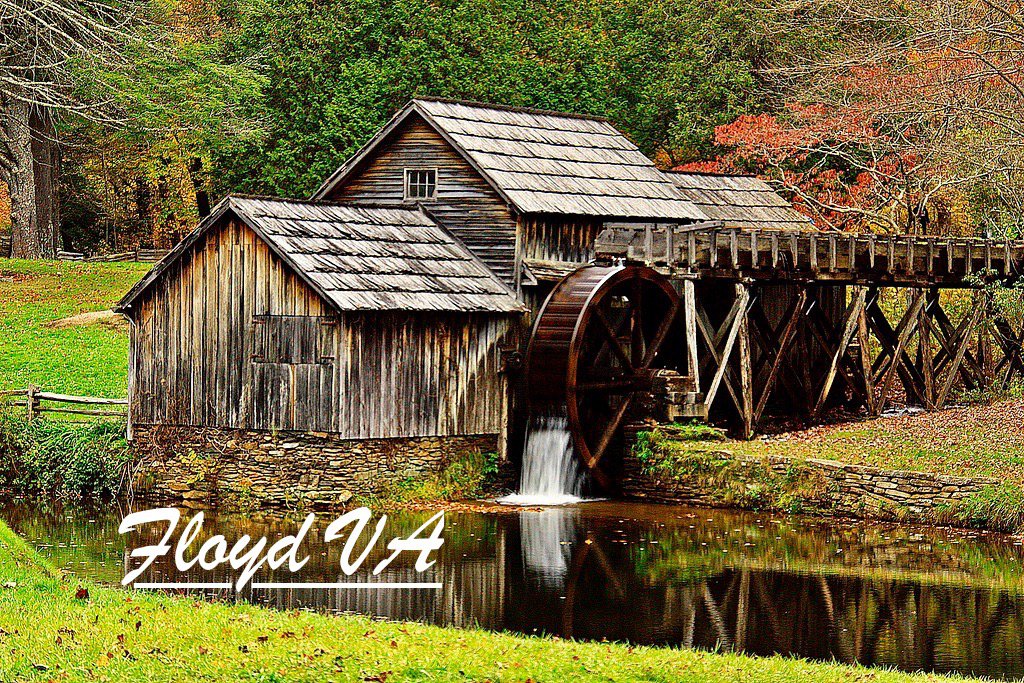 Search For Homes in Floyd

Floyd County has a land area of 383 square miles and is located in the Blue Ridge province of the southwestern part of Virginia.   Floyd is a county of small mountains, valleys, ridges, and small streams. The county’s terrain is rolling, and the official elevation is 2,500 feet. Buffalo Mountain, at 3,971 feet, is the highest point in the county.

The county seat, The Town of Floyd, is 41 miles – about an hour’s drive- southwest of Roanoke on U.S. 221. Floyd is one hour west of Martinsville, and 90 minutes north of Winston-Salem, North Carolina.

The Little River, the county’s largest waterway, is formed by three main branches, or forks: the East, West, and South (also known as Dodd’s Creek) forks.  The County is situated atop a high plateau of the Blue Ridge Mountains which divides the eastward flowing from the westward flowing waters. It is said that no water flows into Floyd County. The county is drained primarily by Little River and its tributaries which flow into New River below the Claytor Lake Dam and, in turn, by way of the Kanawha, the Ohio and the Mississippi, into the Gulf of Mexico.

Nickel, cobalt, iron, copper, arsenic, and soapstone were mined at one time in various parts of the county.

Floyd County population in 2012 was 15,390 per the Census. This is a slight percent increase and can be attributed to the beautiful farms and forests, the cultural vitality, the advanced telecommunication technology, the strong school system, the availability of local foods and wines and close proximity to Virginia Tech.

According to tradition, present day Floyd County was among the first areas explored when Virginia Colonists began to push into the mountains of Virginia. In the mid-to-late 1600s, expeditions began to map the area that was then principally a hunting-grounds by Indians, including the Canawhay tribe. The first white settlements in the area occurred in the mid-18th century. By the 1790s, English, German, French, Scottish and Irish immigrants settled in what is now Floyd County.

One of the first industries, Spangler’s Mill, was also established in this period. Watermills such as this one continue to symbolize the resourcefulness of residents and the importance of natural resources and living in touch with the land.

Coming onto the crest in what is now Floyd County, settlers were often astounded by the natural beauty, particularly in the Spring when the Chestnut blooms made a sea of white. Writing of their new plateau homeland, they often referred to it as “our beautiful mountain.”

Land in the southwest portion of the County that was ceded by the Cherokee Nation to the British in 1768 was, in turn, part of the vast land grant made to Lighthorse Harry Lee, father of Robert E. Lee and Charles Carter Lee. The latter moved to the County and penned what is believed to be the first book written here, The Maid of the Doe. It was a book of poetry about the Revolutionary War. Part of that Lee property, Buffalo Mountain, is now a natural recreation area.

In 1831, Floyd County was established and named for Governor John Floyd. Governor Floyd was a native the Montgomery County, the parent County of Floyd. Reflecting an early and strong commitment to education in the community, the Jacksonville Academy was established in 1846. It served students from Floyd and surrounding counties. The Jacksonville Academy was located in one of the two buildings that are now Schoolhouse Fabrics.

The current County seat, originally named Jacksonville for the seventh president, Andrew Jackson (1829-1837), was completed in 1834. Manassah Tice (5 acres) and Abraham Phlegar (1 acre) gave land for the county seat. The town was incorporated in 1858, and its name was changed from Jacksonville to Floyd in 1896.

Throughout the 19th and 20th centuries, the local economy was dominated by agriculture. Textile manufacturing rose and fell during this time. The construction of the Blue Ridge Parkway during the Great Depression brought some needed work to the County and more importantly created a linear park and access way to introduce travelers to the arts, crafts, and music of Floyd County.

Mabry Mill, located in Floyd County, is one of the most visited and photographed sites along the 469-mile length of the Blue Ridge Parkway. The Rocky Knob recreation area along the Parkway also features hiking, camping, and panoramic views.

By the 1970s, Floyd County was “discovered” by the back-to-the-landers seeking rural refuge. Many of the new residents were artists or artisans. In Floyd County, they found a land of natural beauty, a unique geography with all waters flowing out, rich hand-craft and music traditions, and open opportunities for creative, rural living. These same assets and the culture of creativity now attract many travelers to Floyd, which has seen a dramatic increase in tourism.

Thanks in part to the natural, cultural and technological amenities, the population of Floyd County in 2000 was up 16% over 1990, to 13, 872 people.  Floyd County is served by an advanced and scalable (underground) 200 Gbps backbone on an open-access fiber network giving amazing and affordable access to the world.

From the 1700s to now, as Americans still seek their piece of ground, a better way of life, and a safe place to be, they continue to re-discover Floyd County.

Online Auction Ending June 24th @ 3 PM. You have the opportunity to purchase a gorgeous piece of land for sale in Floyd County VA! This property features 110.46 acres of ...

Settled on just over 14 acres, this beautiful countryside property offers 100 feet of river frontage, a quiet babbling stream, and a flat secluded 1 acre homesite in pict...

This remodeled and updated 4bed farm house feels like its brand new. The gas fireplace in living room has the most beautiful mantel and screen. Original ship lap walls. K...

Online Auction Ending June 1st at 4 PM. You have the opportunity to purchase a beautiful tract of land for sale in Floyd County VA with frontage on Little River! The prop...

All the reasons why folk come to Floyd County are really good, like a pleasant Friday evening at the Country Store where the Crooked Road leads many for the love of Blue ...

Are you interested in the property values in your neighborhood?